Mathys is a globally operating company. Founded in 1946, the company has been active in medical technology since 1958. Since 2003, Mathys has focused exclusively on the development, manufacture and distribution of products for artificial joint replacements. The company's services include implants for hips, knees, and shoulders, as well as synthetic bone replacements. In 2013, Mathys moved into the field of sports orthopedics. Mathys has development and production sites in Switzerland and Germany, as well as subsidiaries in 11 countries. Overall, Mathys employs around 600 people.

In 2021, Mathys and the US firm DJO are combining to strengthen their position in the growing market for artificial joints.

Realignment of the Mathys orthopaedics business

Discover how a small family business became an international orthopaedic company and follow the traces of time: 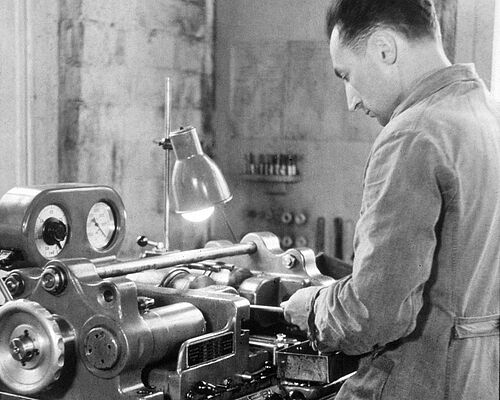 Foundation of the company 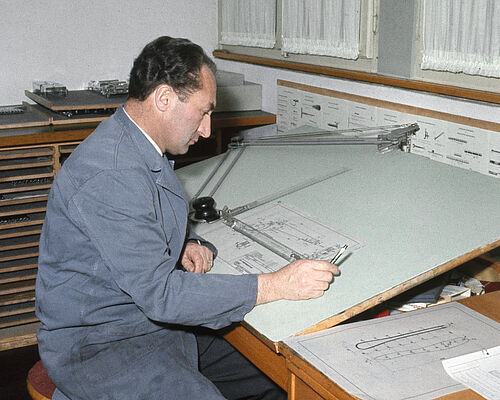 Maurice E. Müller meets Robert Mathys. This is the impetus for the move into medical technology: Mathys begins developing and producing implants and instruments for knee surgery and orthopaedics. He attends operations at the hospital in Grenchen to gain insights into the subject. 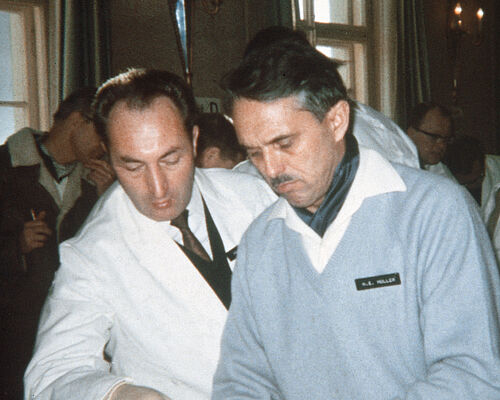 First implantation of a hip joint in Europe

On 9 February 1961, Maurice E. Müller implants the first hip prosthesis developed by Robert Mathys into a patient. It is the first implant of an artificial hip joint on the European continent. 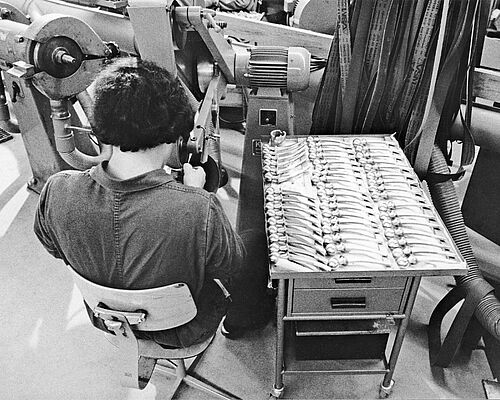 Development and production for Protek

Mathys begins production of artificial hip joints for the company Protek in Bern, owned by Maurice E. Müller. This is the inception of the second mainstay of the company’s activities. In addition to screws and plates, it now also produces artificial joints. 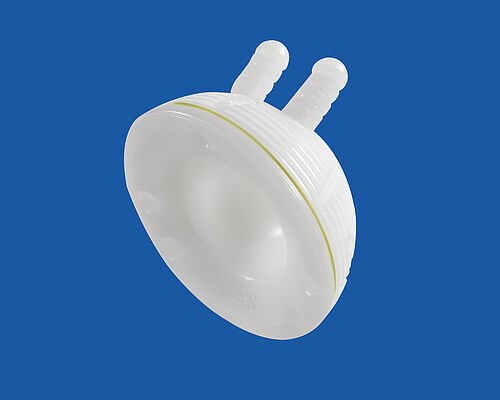 The beginning of the uncemented elastic monoblock cup. This is developed on the basis of the design of the cemented Müller cup with the aim of achieving high primary implant stability without bone cement. 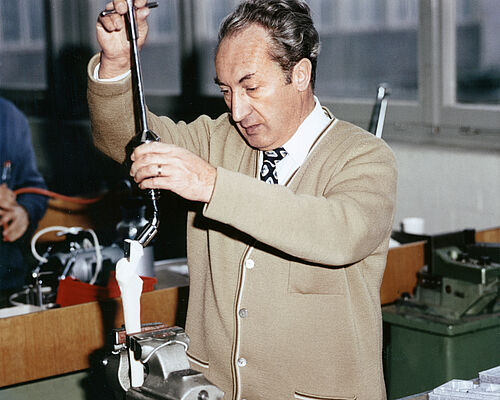 The Faculty of Medicine of the University of Bern awards Robert Mathys an honorary doctorate with the title «Doctor honoris causa» for his contributions to the field of bone medicine. In his nomination letter to the Dean of the Faculty of Medicine, surgeon Maurice E. Müller writes: «In Mr Mathys, the faculty would be awarding an honorary doctorate to a simple man who has made pioneering achievements in the field of bone surgery.» 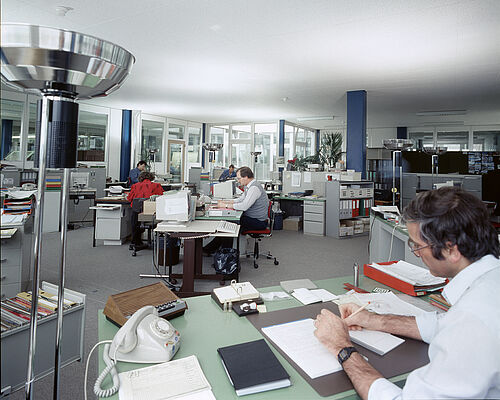 Worldwide, Robert Mathys Co. employs over 400 staff. The product range has grown to 3,149 products. The company’s clients include 8,000 hospitals, and 95 % of production is exported. The most important markets are France and Germany. 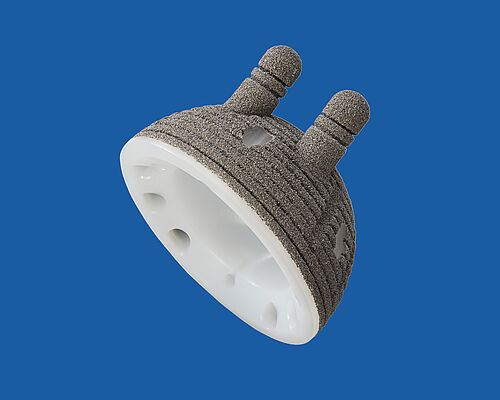 Mathys’ own «RM» (Robert Mathys) titanium coating is first used in the RM Classic. The titanium particles enable the osseointegration of the implant. They are individually anchored in the polyethylene and not structurally connected to each other. The elasticity of the implant is therefore not changed by the coating. 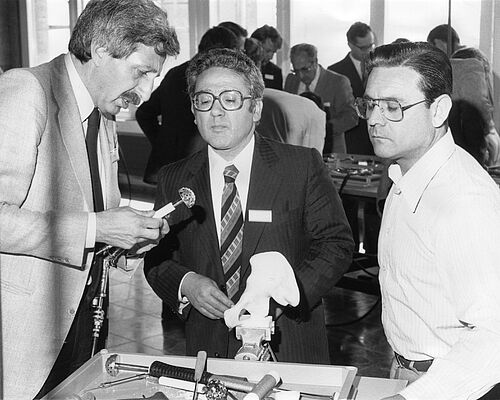 The Mathys shareholders lay the strategic foundation for the establishment of a dedicated orthopaedics division. Hugo Mathys takes charge of setting up the Joint Replacement Division. This will later prove an important decision in the company’s ability to survive independently. 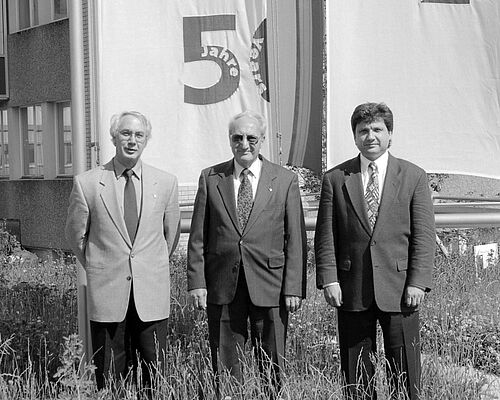 Marketing of first products under own name

Robert Mathys Jr takes over as Chairman of the Board of Directors of «Mathys Medizinaltechnik AG». The company celebrates its 50th anniversary with a big celebration and a new brand image. Over a number of decades, Mathys produces hip joints for Müller’s company Protek until it is acquired by Sulzer Medica in 1996. Drawing on its 35 years of experience, Mathys starts marketing its joint prostheses under its own name in 1996. Five years earlier, Mathys set a deliberate course for this point with its strategic focus on joint replacement. 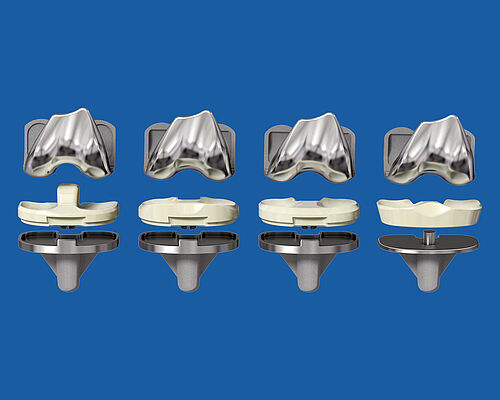 The proven, stable and enhanced knee system balanSys BICONDYLAR is first implanted in 1998. Ahead of ist time when introduced, it is still going strong today and has been subject to further technological development in recent years with the launch of leggera instruments and vitamys inlays. 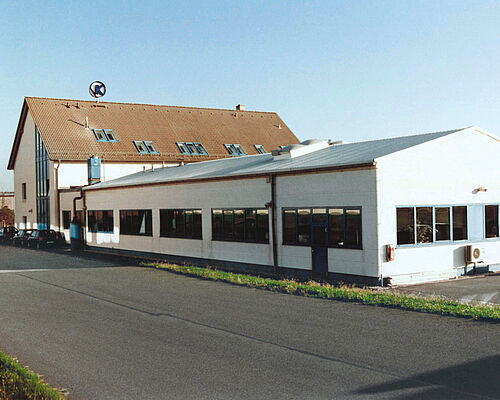 Mathys acquires the company Keramed in Germany. The company is specialised in ceramic materials, with which Mathys has been experimenting in the field of joint replacements for years. In the early 1970s, Keramed was one of the first companies worldwide to develop and sell bioceramics for endoprosthetics. 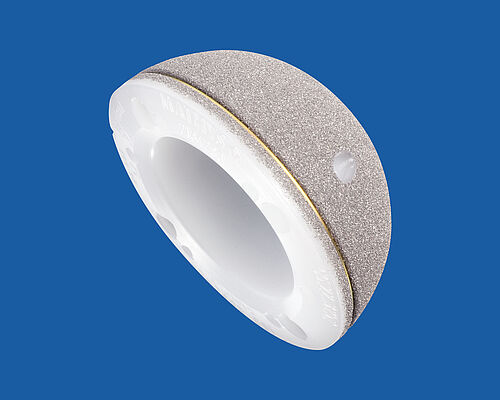 Based on the proven concept of the elastic RM Classic cup, development continues with the introduction of an RM Pressfit version without pegs. 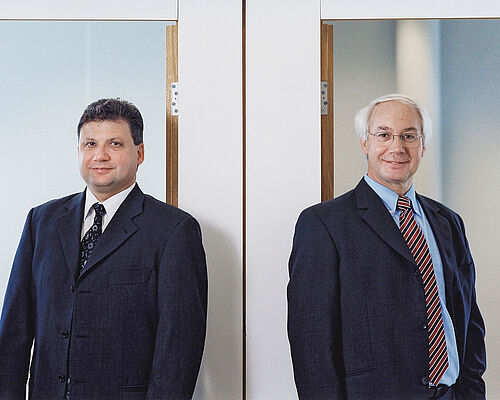 Selling of the Osteosynthesis to «Synthes»

The Mathys family decides to sell the Osteosynthesis Unit and thus 90 % of the company’s volume to Synthes USA. The new Mathys Ltd Bettlach now focuses on hip, knee and shoulder prostheses. CEO Hugo Mathys leads the company, alongside Chairman of the Board of Directors Robert Mathys Jr, who will pass down that role tot Hugo Mathys a few years later. 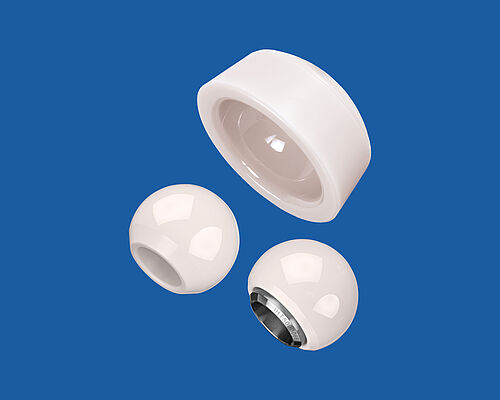 Five years after the acquisition of Keramed, Mathys launches its first heads made of dispersion ceramic – ceramys – for use in hip arthroplasty. All Mathys ceramics are developed, produced and tested internally. 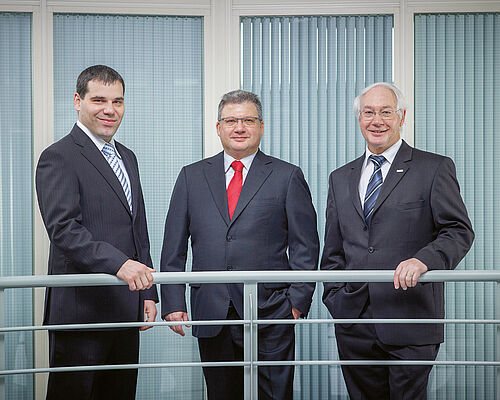 Livio Marzo becomes the first member of the third generation of the family to join the Mathys Board of Directors. Marzo is CEO of Thommen Medical Group, which specialises in artificial tooth root replacements. The Thommen Medical Group’s dental implants also originated with Mathys. 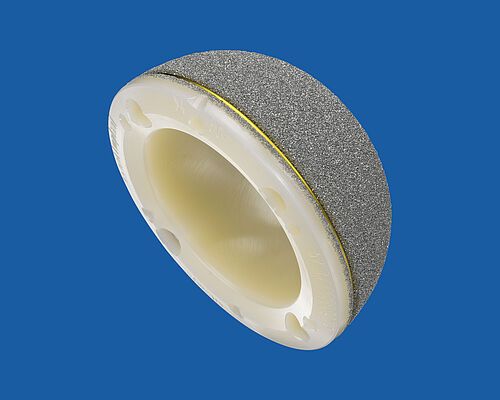 The RM cup undergoes the next step in its development and from now on is offered in vitamys. vitamys is a vitamin E-enriched, highly cross-linked polyethylene with high elasticity, high resistance to wear and oxidation and good mechanical strength. 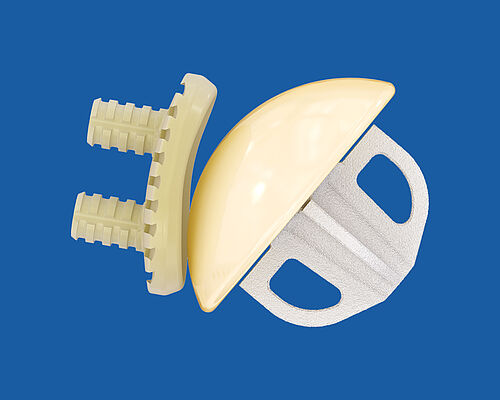 Mathys makes a pioneering achievement in development with the stemless shoulder prosthesis. Mathys set itself the objective of developing a solution that united the advantages of simple anatomic reconstruction without major bone loss. The result is Affinis Short. 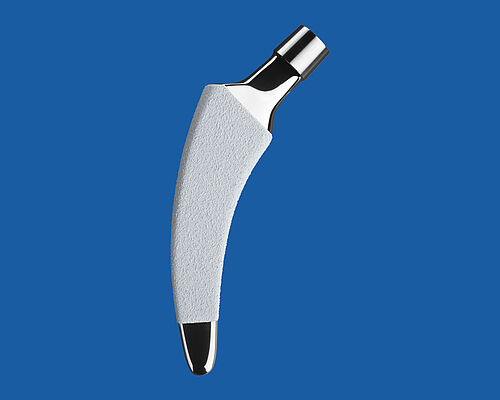 With the optimys short stem, Mathys achieved a further pioneering development. The prosthesis is developed to reconstruct the individual anatomical conditions of the patient with a bone-preserving design. 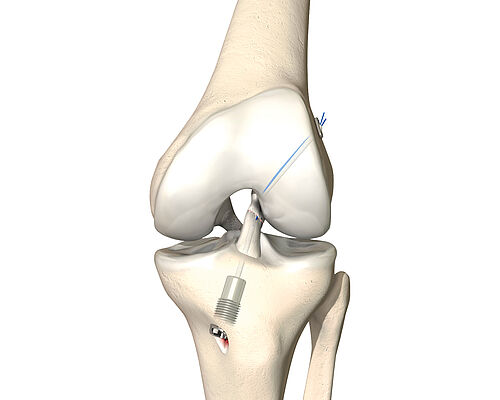 With Ligamys, Mathys gains a foothold in the field of sports orthopaedics. Ligamys is a method for the treatment of cruciate ligament tears in which the original cruciate ligament and its functions are preserved. A further product that reflects the principle of «Preservation in motion». 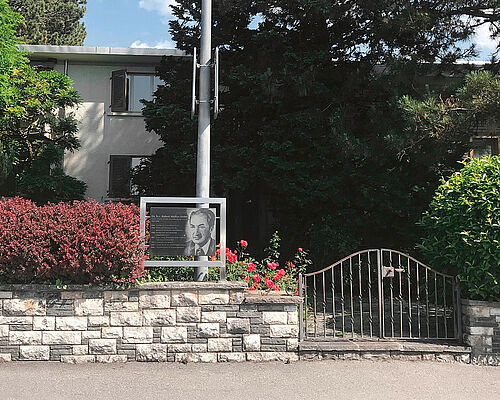 «Güterstrasse» in Bettlach is renamed «Robert Mathys Strasse» in a ceremony attended by ten grandchildren and great-grandchildren of the company founder. In front of the house in which the entire company history began, a granite commemorative plaque is unveiled. 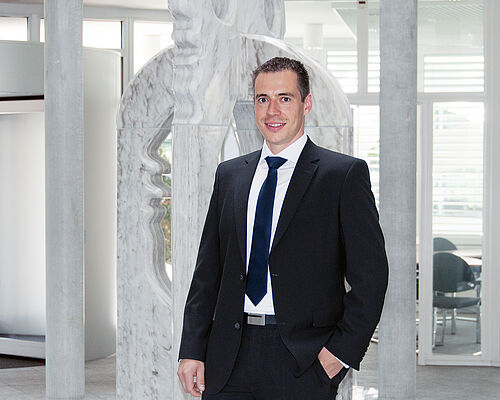 Roger Mathys is elected to the Board of Directors

Test pilot Roger Mathys becomes the second member of the third generation to join the Board of Directors of Mathys Ltd Bettlach, succeeding his father, Robert Mathys Jr. 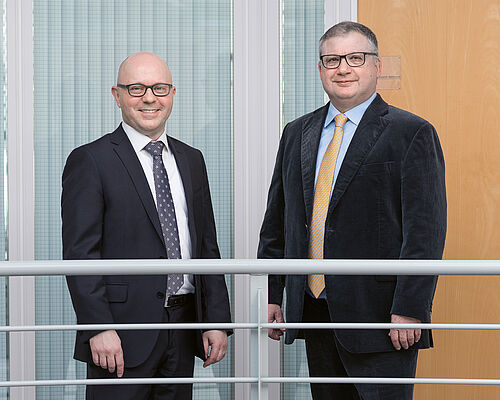 After a three-year consolidation phase, Hugo Mathys hands over the operational management of Mathys Ltd Bettlach to Benjamin Reinmann. Originally a physician, Reinmann comes from the family-run business Ypsomed, where he worked for 12 years. «I know what I’m getting into», he says on taking on the role. 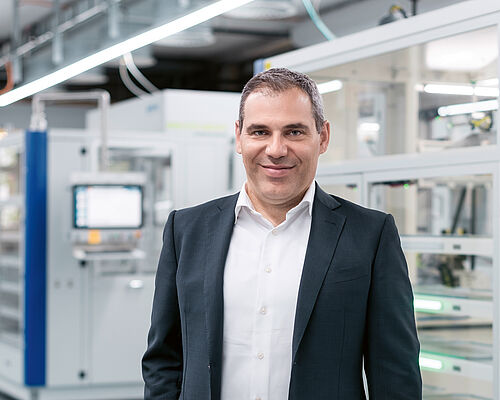 Livio Marzo becomes Chairman of the Board of Directors

Hugo Mathys hands the chairmanship of the Board of Directors to his nephew Livio Marzo and thus the third Mathys generation. Though impacted by the coronavirus pandemic, Mathys Ltd Bettlach nevertheless posts a profit at year end. 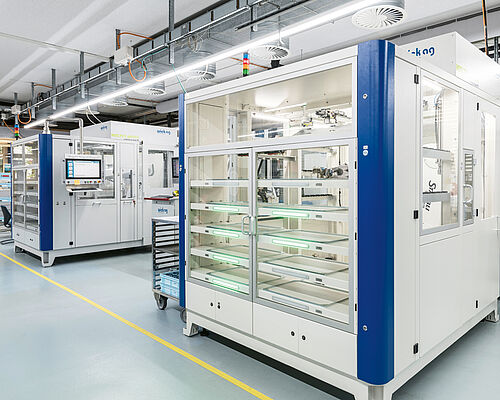 Mathys celebrates its 75th anniversary and the hundredth birthday of its founder Dr Robert Mathys. It is an extraordinary company history in many ways, one that underscores the slogan «Preservation in motion» and the values pioneering, cooperative and proven.

Furthermore, Mathys is joining forces with the American company DJO to strengthen its position in the growing market of joint replacements.

Our download centre contains all documents and information available on the website. The therein used images (impressions) are not representing a connection between the use of the medical device described, nor its performance. A filter search can speed up and narrow down your search.

Please note that our General Terms and Conditions of Use apply to all downloads.